There seems to have been something of a genital fixation amongst commentators on Vitruvius’  in the 1490s and early 1500s. Vitruvius’ book on architecture was a favourite for many renaissance theorists, and his small passage about human proportion was revisited several times, notably by Leon Battista Alberti in his On Sculpture, by Francesco di Giorgio Martini in his treatise on architecture, and, most famously, by Leonardo da Vinci (some of these are collected together here; Leonardo’s version of the Vitruvian Man is to the right).

In a very tricky to interpret bit of text, Vitruvius attempts to create some rules to how each part of the human (for which read male) body relates to the rest (so the length of a foot is a sixth of the height of the entire man etc), and also says that” if a man lies on his back with his hands and feet outspread, and the centre of a circle is placed on his navel, his figure and toes will be touched by the circumference. Also a square will be found described within the figure, in the same way as a round figure is produced”.

Leonardo’s drawing is basically a response to Vitruvius’ ideas. He remeasured people himself and made a series of his own proportional drawings. His notes on proportions are written around the image (in mirror writing, of course).  He agrees with Vitruvius  that the stomach button could be the centre of a circle, but also argues that it is not the navel that’s the exact centre of the body, but the penis – or “virile member” to translate exactly (“Il membro virile nascie nel mezo dell’omo“). He’s shown this on the drawing with the horizontal line that goes across the base of the penis which is, indeed, half-way down the square. 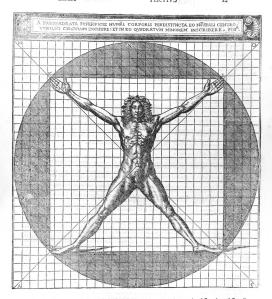 Another commentator on Vitruvius, Cesare Cesariano,  translated the Latin text in a published edition of 1521. His illustration of a perfectly proportioned man has the belly button as the centre of both the circle and the square, but as if to make up for that, his figure has a prominent erection.

In yet another edition of Vitruvius from the early sixteenth century, a manuscript now in Ferrara by an anonymous  writer, his drawing of the canon of proportions is  illustrated by a man who also seems to have an erect penis (unless I’m seeing things) – the illustration is to the right.

I have a few ideas why this should be, and am currently writing them into a chapter on life drawing, proportion, and the perfect body. I’m still puzzling over this a little bit though, and wonder how Cesariano’s original audience may have reacted to this image?

7 responses to “Leonardo’s Measure – The Genitals of Vitruvian Men”