The Power of Sexual Assault in Titian’s Tarquin and Lucretia: Art Pickings 3

These thoughts about Titian’s Tarquin and Lucretia came about during a discussion at the Fitzwilliam Museum in Cambridge (UK) for the wonderful Behind the Scenes at the Museum podcast. Thanks to Tiffany Jenkins, Luke Syson and Michael Savage for our conversation – worth getting up at 4am for! I should also warn readers that given the subject of the painting, this post could be upsetting for some.

She tries to push him back, her fingers splayed against his chest, but it’s not working. He’s taken her other arm in his grip, ruddy fingers pressing into soft pale flesh. His eyes stare, but he does not see her, focussing completely on the as yet-unconquered terrain of her body. Dagger held in a tight fist, arm tensed, knee thrust between her legs, his lavish velvet hose and embroidered gold doublet don’t mask the brutality of his actions. The loosening of his hose makes the viewer’s stomach sink. We know what it indicates, what is to come.  She sees him, though. Her eyes are fixed on her attacker, face blushed in energetic defence and a tear escaping onto her cheeks. We don’t help her. We just look on, like the figure – a servant? – who lifts the heavy dark velvet curtains that swathe the scene, and appears transfixed, witnessing the rape.

This disturbing painting, normally called Tarquin and Lucretia (giving them equal billing, as if it depicts two friends or lovers), is in the Fitzwilliam Museum in Cambridge. Like many paintings from this period of mythological and historical subjects, it shows a sexual assault. The story, told most famously by Livy, explains that in 509 BCE Sextus Tarquinius, the son of the king of Rome, raped Lucretia, the virtuous wife of Lucius Tarquinius Collatinus. Afterwards, Lucretia told her husband, and he and his family vowed to avenge the attack. Despite their entreaties, Lucretia stabbed herself in shame, then her family drove the Tarquins from Rome and founded the Roman Republic. It was widely understood in the Renaissance that this story was not about the rape of a woman, but about civic and family honour. Lucretia’s body was a symbol of a homeland plundered by a despotic tyrant.

The Venetian renaissance painter, Titian, made this image for the King of Spain, Philip II. Titian spent much of his career as a propagandist to the wealthy elite, providing rooms to relax in for men whose actions led to mass-murder, starvation and displacement of populations. Notably, in his old age, his work was altogether less celebratory, more reflective. His later poesie for Philip II are some of the few sexual assault scenes in Renaissance art that seem to show some empathy with the victim. Europa has been thrown back, carried off by the bull. Her face is shadowed, her dress dishevelled, her legs splayed untidily. Callisto is brutally held back by naked nymphs as they peel back her clothes to reveal her pregnant belly to the unforgiving eye of the goddess Diana. Even the way Titian uses paint on these late canvasses – the choppy impasto, the fingerprints, the opaque dashes of lead white for highlights – imbues the surface with emotional physicality. 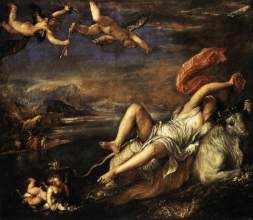 Titian knew women who had been the victims of sexual violence. He was friends with one of Venice’s most famous courtesans, Angela del Moro, also known as La Zaffetta – in fact, some art historians suggest that she acted as his model in the 1520s and ‘30s. In 1531 the Venetian poet Lorenzo Venier published a poem that celebrated del Moro’s gang rape, or “Trentuno”. He explains in the beginning of the poeme that this was a way of punishing her for spurning his advances and gleefully recounts how 79 men brutalised her one after another, leaving her half dead.

Courtesans came in for many verbal and physical attacks in a society which was suspicious of women with their own property and means to make a living, and  Venier’s poem reflects the many  “punishment” sexual assaults on women by groups of men. This was a time when rape was considered by many to primarily be a blow to family honour rather than to an individual person; punishment for the rapist often focussed on him marrying the victim, and there were tariffs of punishments depending on the perceived social status of the woman involved – high penalties for a noble virgin compared to nothing for a servant or slave.

For much of the sixteenth century, Italy was at war. Widespread rape of female civilians  by soldiers was used as a way of controlling populations in sacked cities. There are contemporary accounts of women taking Lucretia as a model and killing themselves – often by drowning – rather than submitting to rape. A portrait by Lorenzo Lotto in the National Gallery in London celebrates this type of female virtue as the subject grasps a drawing of Lucretia killing herself with a dagger, the Latin inscription below meaning “no woman survives dishonour, Lucretia sets the example”. Because of her republican roots, Lucretia both stood for virtuous conduct for women, and also the neeed for beleagured states to rid themselves of tyrants, sometimes necessitating great sacrifices.

Titian’s patron, King Philip II, was constantly waging his own wars, of course, notably against the burgeoning forces of Protestantism in lands under his rule, becoming involved in suppressing dissent in the Netherlands, France and England. Earlier he had financed the Catholic League during the French Wars of Religion and before this, continued the longstanding and complex Italian wars, up to the peace of Cateau-Cambresis in 1559. He also shored up Spanish authority in the New World, heading up a regime responsible for the genocide of native populations whilst plundering the land for silver and other goods that flooded the European economy. 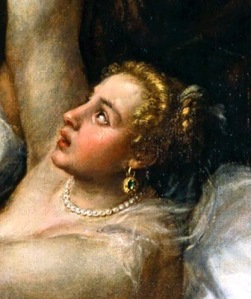 t’s often been pointed out that the uneasy sexuality of Titian’s poesie – which simultaenously tempt with their lusciously painted female nudes and repel with the violence of their subject matter – are well matched to the complex moral world of this pious Catholic with a taste for renaissance nudes. It’s tempting to see Philip – and all war-mongering tyrants –  in the role of Tarquin here, his attack reflecting the ugly violence of hyper-masculine desire for conquest, overwhelming – not even seeing –  the humanity of the victims of war. Perhaps Lucretia cries for us all.

On sexual assault and its punishment in the Renaissance, amongst others, Guido Ruggiero, The Boundaries of Eros: Sex Crime and Sexuality in Renaissance Venice (1985)

The little that we know of Angela del Moro is collected together in Douglas Salkeld, Shakespeare Among the Courtesans: Prostitution, Literature and Drama, 1500-1650 (2012).

The landmark book on images of sexual assault in the Renaissance is Diane Wolfthal, Images of Rape: The Heroic Tradition and Its Alternatives (1998)

Mary Beard lecture on Lucretia and the politics of sexual violence

Further blog posts and videos discussing some of these issues in Renaissance art by me, and the most splendid Sherry Lindquist and Thomas Kren, see the Getty Iris blog.

One response to “The Power of Sexual Assault in Titian’s Tarquin and Lucretia: Art Pickings 3”